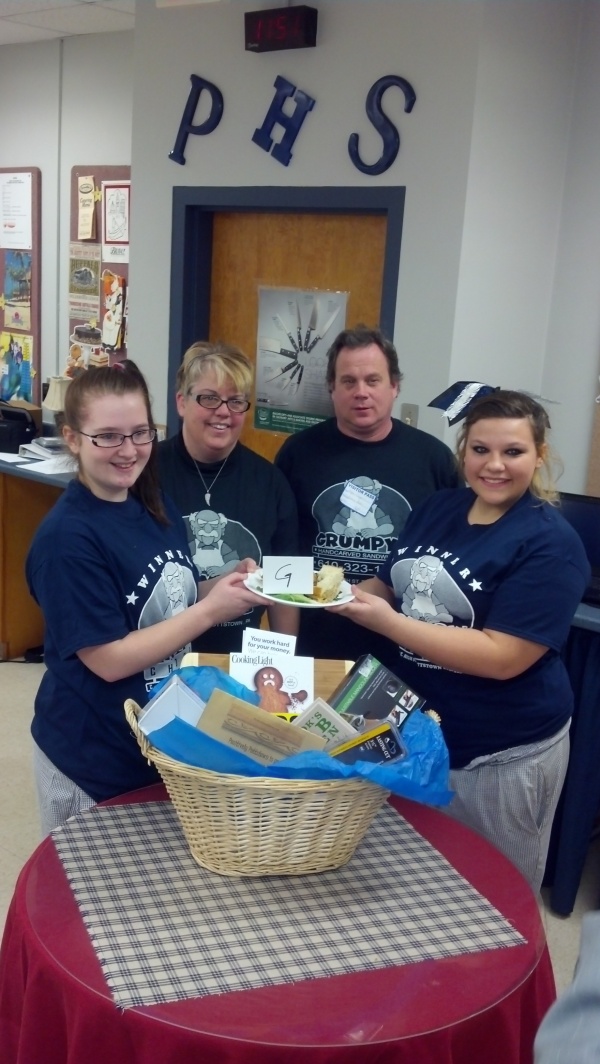 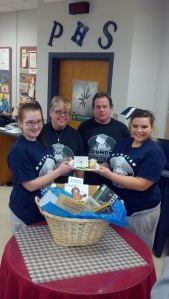 Stop by Grumpy’s Hand-Carved Sandwich Shop at 137 East High Street anytime after 11 am TODAY, when the festivities will get underway to unveil a new sandwich created by the Pottstown High School winners of the Chopped competition.

The winning team of Hannah Irvin and Alyssa Vanish, shown here with Sheila and Gene Dugan, will be on hand with their classmates to celebrate and promote the culinary arts program at the high school.

Wednesday is still veggie day at Grumpy’s! Here’s the menu for today:

Come out and meet the talented students of PHS Culinary Arts! 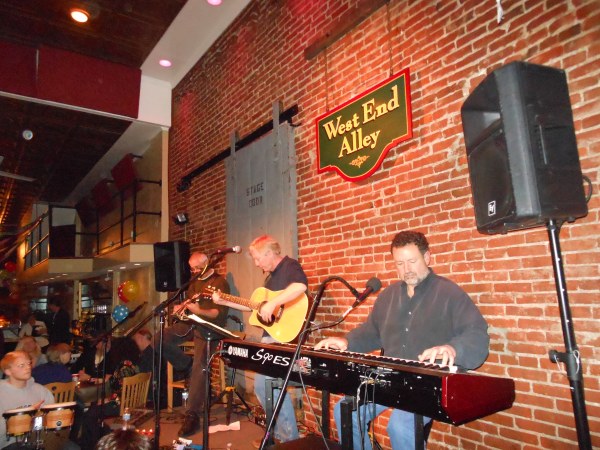 There’s a new kid in town…

West End Alley, a new dining and music venue at 107 East High Street, will celebrate its Grand Opening on Saturday, April 27th! Business partners Ed Wysocki and Hattie Eckman invite the community to come out for a fantastic evening of live music, a DJ and a gourmet buffet. Doors open at 5pm. This event is open to the public and tickets ($20) will be sold at the door. Check out their Facebook page here.

West End Alley is a newly renovated event venue in the heart of Pottstown, across from Borough Hall. They offer full catering and affordable elegance both on and off premises. No event is too big or too small. Consider celebrating your special event, birthdays, anniversaries, weddings or just a gathering of friends. DJ or live music available. The possibilities are endless.

The Spring Instrumental Concert will feature performances by The Hill School Orchestra and Jazz Ensemble.

The Spring Vocal Concert will feature the Chorus, Chamber Choir, and Hilltones and Hilltrebles, the select all-male and all-female a cappella groups.

COME TO THE POSITIVELY POTTSTOWN HAPPY HOUR TONIGHT TO GET $3 OFF YOUR TICKETS TO THE PLAY, BECKY SHAW – TONIGHT ONLY – AT STEEL RIVER PLAYHOUSE

After 28 events since October 2010, the Positively Pottstown Happy Hour is taking a break!

Wanna get happy one more time with your Pottstown peeps?

for food by Grumpy’s, Company Cakes and The Milkman Lunch Co. and Cake Shoppe, fun, complimentary refreshments and networking, all for the same low suggested donation of $5.

Get $3 off tickets to the drama BECKY SHAW, on April 19th only!

Show begins at 8 pm! BECKY SHAW is a brisk, scathingly funny, and contemporary look at dating, marriage and the foibles of relationships. Now, that sounds like fun!

Get tix at the Happy Hour or online at http://www.steelriver.org.

Type in Positively Pottstown for the Promotion Code.

RSVP this minute to positivelypottstown@gmail.com! 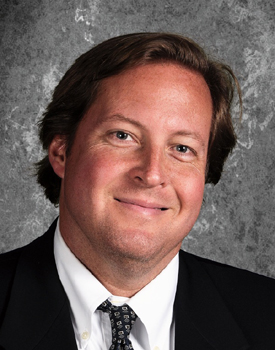 Because April is “National Poetry Month,” Hill’s own  published, award-winning  poet Erik Mortenson is celebrating by sharing a poem a day with The Hill community, something he did last year and is continuing this year.

Erik recently published an award-winning chapbook, The Fifteenth Station (Accents Publishing.) All proceeds from the book will go toward supporting Rwandan women and children with HIV/AIDS.

The Hill’s website describes Erik’s poetry project and the inspiration for it in more detail here, but here are some snippets to whet your literary appetite:

“Mortenson has published a chapbook of poems that share the wrenching sadness, isolation, and physical suffering experienced by an impoverished young African woman with AIDS. The structure for the 15 poems, collectively titled The Fifteenth Station, mirrors the 14 Stations of the Cross that appear in Roman Catholic churches to commemorate the final hours of Jesus Christ.

“Mortenson – who writes as E.K. Mortenson – began conducting extensive research for this project in 2009, delving into religious imagery, medical reports from the World Health Service, and cultural background, all of which he synthesized into poems written in several different voices, primarily that of the woman with AIDS. Each poem (or “station”) advances and flows into the next….

“Late last summer, when The Fifteenth Station won the Judge’s Choice award in the Accents 2012 Poetry Chapbook Contest, Mortenson donated his modest prize money to Partners in Health and pledged to also donate every penny of his chapbook sales profits. To his delight, his publisher, Accents Publishing, has agreed to match his prize money and contribute 50 percent of its own profits from the chapbook sales to Partners in Health.

“‘In the small poetry press world — where presses operate on, at best, a shoestring budget — this is virtually unheard of,’ Mortenson says. ‘This is a most gracious gift.’

“Furthermore, Zachary Lehman, Headmaster of The Hill School, promised to match Mortenson’s prize money on behalf of the School. His offer ties in well with the theme established for students for The Hill’s 2012-13 school year, “What can I do?”

“‘Although the contributions themselves are small, I am hoping to create a groundswell of concern,” Mortenson says. “The book is $5. That’s like, what? A large cup of coffee at Starbuck’s? Now half of that money will go to women and children who need it most.'”

Congratulations to Erik for getting his work published and using his poetry to educate and inspire compassion for others!

The MOSAIC Community Land Trust will host its first “work and play day” of the season on Saturday, April 13 from 9 to 12 at the garden, located at 423 Chestnut St.

The day is geared toward those who would like to have a plot to grow their own fresh vegetables.

The event will include a brief information session about what community gardens are about, as well as take applications for raised bed garden plots for the 2013 season.

There will be a wide range of free seeds and seedlings for garden plot owns to dig in and plant that day.

Plot owners pay a small annual fee to lease their plot and actively cultivate it throughout the entire growing season.

Individuals, families, community organizations, youth groups and local restaurants are all welcome to apply for a plot.

Applications for a plot can also be found at the group’s web site: www.mosaiccommunitylandtrust.org/ and can be mailed to MOSAIC Community Land Trust, 10 S. Hanover St., Pottstown, PA 19464.

ArtFusion 19464 and help us live our mission of making the arts accessible to everyone in our community. Fashion Plates also serves a vital purpose in helping us keep our doors open, raising funds to meet our day to day expenses.This year’s theme is Fashion Notes, and the event will be an amazing fusion of food, historical fashion and live music.

Tickets are $70 per person, or two for $120. Your ticket includes a fabulous dinner and yummy dessert, a chance to win fun door prizes and a great night of live music and fashion.

After 28 events since October 2010, the Positively Pottstown Happy Hour is taking a break!

Wanna get happy one more time with your Pottstown peeps?

for food, fun, complimentary refreshments and networking, all for same low suggested donation of $5.

Get $3 off tickets to the drama BECKY SHAW, on April 17th only!

Show begins at 8 pm! Becky Shaw is a brisk, scathingly funny, and contemporary look at dating, marriage and the foibles of relationships. Now, that sounds like fun!

Get tix at the Happy Hour or online at http://www.steelriver.org. Type in Positively Pottstown for the Promotion Code.