The article about Danville, PA that we just added to our Revitalization Library got me thinking about very specific actions that Pottstown might want to consider now.

Why not take the $45,000 remaining after painting the Mrs. Smith’s building brick red and apply it to QUANTIFIABLE & VISIBLE ACTIONS to improve Pottstown’s downtown?

High Street is THE face of Pottstown. People take one look and make a snap judgment, maybe without even getting out of their cars. Pretty soon High Street is going to be beautifully illuminated. Now is the time to press any advantage to be gained from that, coordinate resources, and put out a blitz of tried-and-true downtown economic development strategies.

1) I’ve heard from several sources that there was a downtown site  inventory/survey started or completed as follow-up to the Economic Development Strategic Plan. Where is it? Resurrect & update it. Find a simple, clean, attractive, inexpensive way to create an online database with key information about vacant properties that are available for sale or rent; allow for uploading of photos. Call upon Montgomery County Community College’s new urban planning students to help with site inventory and in getting additional info from local realtors and the county’s property records database. Input the data and unveil a new downtown district marketing tool via PDIDA’s website.

2) Determine the vacancy rate in the downtown and set a goal for getting X number of additional storefronts occupied within 6 months. Use some of the $45K to create a rent subsidy/marketing incentives package to attract new businesses that have solid business plans. Include existing businesses in the marketing plans. (I don’t know what PDIDA’s budget is, but I’m pretty sure it needs more resources to get its job done.)

3)  There is this wonderful resource for new and existing business owners right in the New York Plaza building at 244 High Street: SCORE. They’re a non-profit business mentoring association that gets funding from the U.S. Small Business Association. Four times a year they offer a workshop seriesto help with all aspects of running a business. They offer other courses as well, all of which are taught by experienced professionals who volunteer their time to share their knowledge. Use some of the $45K to fund partial scholarships for new Pottstown-based businesses and nearly-full scholarships for existing business owners.

Imagine the messages the Borough could pretty quickly & easily send to the business world:

1) Here’s our downtown property inventory; we want to help you find the space that works for your business.

2) If you have a solid business plan, we will help with the rent during a pre-determined start-up phase.

3) We help promote all our businesses.

4) We will fund training workshops and introduce you to a network of business professionals to help you succeed.

5) By the time the 2011 First Saturdays start up again, there will be a VISIBLE difference in the downtown.

6) By coordinating the expertise already in the community, we can make $45K go a long way.

High Street is how the outside world judges you.At some point, you gotta put on your full-court press.

(Ideally, along a parallel path, the Borough would be doing the same thing for its industrial sites, including facilitating brownfield clean-up & marketing the sites nationwide, even internationally. I’d put an emphasis on green manufacturing and renewable energy tech companies, but that’s just me.)

I am sending a HUGE thank-you out to Pottstown resident Andrew Kefer for sending along this article: “Welcome to Downtown Danville, the Vibrant Small Town You Never Expected.”

There are so many lessons here that could be immediately applied to Pottstown’s revitalization.

4) Promote arts district downtown. (Danville is doing a multi-year mural program: “To one degree or another, all murals should touch on Danville’s heritage and history,” said Danville Main Street manager, Jim Wilson. Although I think a mural program would be fantastic, in the post that follows this one, I’m going to suggest using the additional $45K from the re-painting of the Mrs. Smith building toward other economic development efforts. For me it’s a matter of timing and getting the most bang for the buck. )

5) Create a business incubator downtown. Get designated as a Keystone Innovation Zone to get grants to attract tech start-ups and entrepreneurs. (Is this state designation/funding still available?)

Thanks again to Andrew for this informative, idea-packed article!

The article below and also found here describes an interesting attempt by Camden, Maine to bring new, high-paying jobs to their community; put a brownfield, riverfront site back in use; and get a tax-foreclosed property back on the tax roll. And citizens were involved all along the way.

Note that the town will still be on the hook for the clean-up costs when all is said and done. It would be interesting to see the overall fiscal analysis and how the added jobs & property/income/business taxes collected might offset that.

I’m not suggesting that this is directly related to any Pottstown property or situation, but merely wanted to bring it to readers’ attention and add it to the Revitalization Library. It’s an innovative approach to jobs growth and brownfield re-use that’s worth watching to see if there are any takers.

Free land, anyone? In an effort to attract business, to bring well-paying jobs for residents and to collect taxes, Camden is giving away 3.5 acres of riverside land to anyone who wants it – with a few caveats.

The future owner of the land will have to pay $200,000 up front. Then, for every eight workers hired, the owner will get a third of the purchase price refunded. The company will have five years to hit the 24 employee mark and get the full rebate of $200,000 before the offer expires.

The jobs also have to pay more than the average wage for Knox County – $45,165 including benefits, to be exact.

The land also will be challenging to build on. The site sits beside the Megunticook River, and used to house Apollo Tannery, which allowed tanning solvents to run into some of the land’s soil.

“With brownfield properties, it’s not unusual to negotiate zero-cost deals,” said Mathew Eddy, the interim development director for Camden. “You have to work around the environmental issues, so it costs more to build the project.”

The town took ownership of the old tannery in 2003 after the previous owner didn’t pay his 2001 taxes. The town is still paying for the property – the tannery needed to be torn down and some chemicals had to removed – which set residents back $836,000. Camden bonded the issue and still has $683,000 to pay off.

Eddy said that trying to sell the abandoned industrial slot this way and making it work for Camden is exciting.

“You had a property that is empty, it was an eyesore, it was an environmental problem,” Eddy said. “[Camden] is taking a brownfield property, cleaning it up and putting it back into production. This is new development. At the same time, the community has been involved every stage of the way – that is pretty special. That is the community taking the bull by the horns.”

The idea was originally brought up by a citizen group and then voted on by the whole town sometime around 2008, Town Manager Roberta Smith said. But the recession hit, so Camden held out on selling. Marketing for the property just started up this month.

“It is a way to say ‘We are open to business and we are willing to make you a deal,'” Smith said. “We were trying to set the bar to attract year-round, sustainable, good-paying jobs. So that was a marker that we thought was a good goal to reach for.”

There are other examples in Maine of communities giving away brownfields, according to Eddy.

“It’s not a brand-new concept in economic development, but it’s very new for Camden and the midcoast and it could prove to be a great model,” said Dan Bookham, executive director of the Camden-Rockport-Lincolnville Chamber of Commerce. “I think it’s a great example of community citizens taking an active role in determining their own future.”

There have been some calls on the property, but nothing serious yet, Eddy said.

There is no deadline for business owners to contact the town, according to Smith.

“Let us know when you want to buy it.” 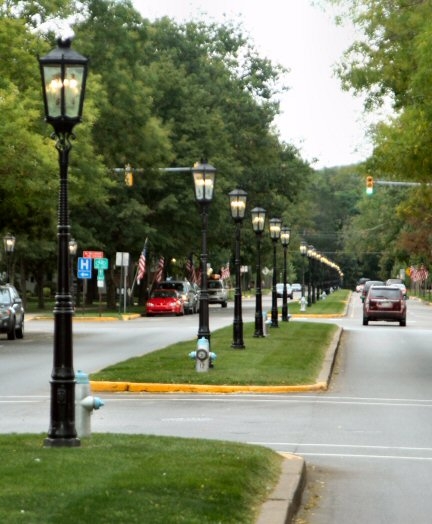 The article and photo below were submitted by award-winning writer, editor, and photographer Joe Zlomek, who is the Managing Editor of The Post Publications. A hearty “thank you!” to Joe for contributing. With this article, I’m starting a “Revitalization Library” subject category at Positively!Pottstown. In it, you will be able to find revitalization stories and examples mentioned not only by me but by you, the readers and commenters. Together, we can discover the broad range of possibilities and acquire a kind of revitalization “vocabulary,” so we’re all speaking the same language as we write Pottstown’s revitalization story. 🙂

Wellsboro, PA – A place to stop in
by Joe Zlomek

Like Pottstown, Wellsboro PA (in Tioga County along Route 6 of Pennsylvania’s northern tier) was built on, and because of, industry. Early in the 20th Century it served as a shipping point and trade center, with businesses that included fruit processing, flour and woolen mills, and much more. But as they did in Pottstown, eventually those industries moved out.

The departures forced the borough to change. Because it is only 10 miles from Pine Creek Gorge, the natural wonder known as “the Grand Canyon of Pennsylvania,” two of Wellsboro’s thriving industries are now tourism and retailing.

The length of its downtown is small in comparison to Pottstown’s but, also in comparison, far more robust. Shops are well kept, busy, and open late. The merchandise selection is diverse. Several excellent restaurants can be found within a two-block walk. And the lanterns that became a fixture of the boulevard-like Main Street coursing from east to west through Wellsboro add to its ambiance. They burn from mid-afternoon long into the night.

Is a proposal by Pottstown Main Street Manager Leighton Wildrick for the year-’round lighting of High Street the sole or best solution to attracting more consumers downtown? Not by a long shot. However, it and other changes can be keys in creating an environment that, as in Wellsboro, changes the perception of downtown from “a place to pass though” to “a place to stop in.” ~