Eileen Schlegel, the Pottstown Parks and Recreation Director since 2008, passed away suddenly last Saturday. Those wishing to pay respects and honor her life may do so at a viewing from 7 to 9 p.m. tonight at Warker-Troutman Funeral Home at  726 E. High St. The funeral will be at the funeral home on Saturday from 10 to 11 a.m.

According to Evan Brandt’s Mercury article, Eileen grew up on Queen Street and graduated from St. Pius X High School. She started working for the Parks Department in the early 1990s. I will always remember Eileen for being the go-to person for so many community activities and events. She oversaw a department that was responsible for all of the Borough’s parks, the spray park, Trilogy BMX park, Riverfront Park,  the Bark Park, and year-round recreational programming for all ages. She and her staff could be counted on to provide the chairs, sound equipment, power, games, hot dogs and hot chocolate at parades, 4th of July festivities, the Polar Bear Plunge, the Funky Santa 5K, the Volleyball Rumble and so much more.  Eileen Schlegel had a hand in all this, in the life of the community, and in the seasonal rituals that become traditions and make a town a home. She will be remembered for many years to come

Memorial contributions in her honor may be made to Helping Hands Inc., 415 Hoffmansville Road, Bechtelsville, PA 19505. For more than 30 years Helping Hands has been serving individuals with developmental delays and mental and physical challenges.

The Pottstown CARES Project will debut on October 25th as a new kind of community cleanup day in Pottstown’s core neighborhood. CARES stands for Community, Awareness, Responsibility, Empowerment, and Sustainability. It is being organized by The Hill School, Pottstown Borough, and Pottstown School District, and will include participation by students and staff from all organizations. Right now the organizers are seeking input from residents in the form of concerns and suggestions for doable spruce-up projects that will, nevertheless, make a positive impact on the neighborhood bounded by High Street, Hanover Street, Beech Street, and Edgewood Street.

Requests can be e-mailed to PottstownCARES@pottstown.org.

The types of projects that could be undertaken might include painting a fence, cleaning up alleys, getting pot holes filled in, or weeds pulled from gutters and along sidewalks. Even if all the suggestions cannot be completed on Oct. 25th, the plan is to follow up with other CARES project days and the building of collaborative relationships to strengthen neighborhood pride, safety and appearance.

Property owners and residents who would like work done on their property will have to sign a waiver to allow volunteers to come onto their property. For more details, see Evan Brandt’s post here on The Digital Notebook.

Evan Brandt’s article in yesterday’s Mercury provides a nice summary. Public employee pensions, the state of Route 422, the potential for gerrymandering, the ongoing challenges of revitalization, the concentration of social services and the people they serve, and the effects of the concentration of housing vouchers in Pottstown were all up for discussion. The Commissioners were well-prepared and promised to provide follow-up information to numerous citizens.

One of the brightest moments of the meeting came when Shanae Roberts, the President of the West Campus student body announced the figures for the amount of community service provided by the College over the past four years. It was encouraging to see a young person at the meeting, participating in the give-and-take of democracy! Ms. Roberts reported the following:

Between 2008-2012, MCCC has reached out to the community with 3,695 volunteers putting in more than 33,700 hours with 117 partnering opportunities. This amounted to over $100,529 in monetary donations. In 2012 the College had the highest number of volunteers to date with over 918 volunteers contributing 15,500 hours of service to 28 partner organizations, including the Norristown Police Athletic League, Olivet Boys and Girls Club, Miller Keystone & American Red Cross Blood Drives, and Project Linues. An estimated $38,300 in monetary donations was raised.

Not only is the West Campus proving to be an important revitalization partner as it rehabilitates and re-uses historic buildings in town, but there is also a strong culture of developing and sustaining connections in the community. Thanks to MCCC for hosting this meeting, which had a very strong turnout, perhaps an indication of a new core constituency that believes in a better Pottstown and is impatient for change. 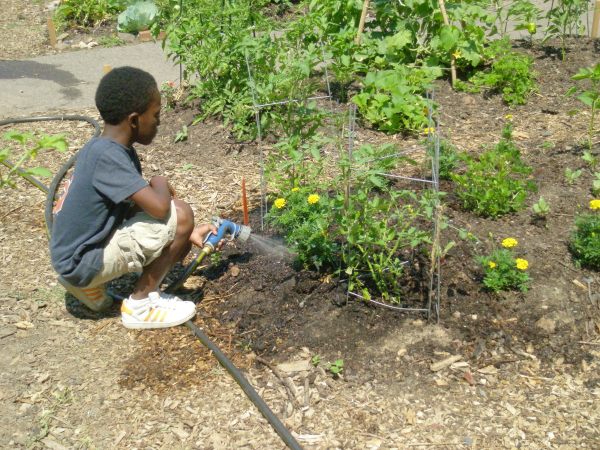 There are two awesome outdoor events this weekend in Pottstown!

#1 The Pottstown Pet Fair 2012  in Smith Family Plaza (right in front of Borough Hall) is welcoming all kinds of pet-related businesses, services, and organizations for a pet- and family-friendly fair. It takes place from 9 am to 3 pm.

Evan Brandt’s blog post, “Something to Bark About”, gives all the details, including the fact that there will be ministers on hand from 10 am to 2 pm to bless all animals, although I’m not sure if that includes the 2-legged variety. There will also be a butterfly garden and food vendors.

To get to Smith Family Plaza, one of Pottstown’s premier public park spaces, plug 100 E. High Street into your GPS. 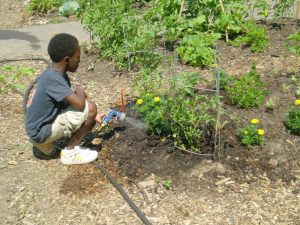 If you’d like to see the many plots that have produced hundreds of pounds of veggies this season, learn how to make salsa, and pick some fresh veggies to take home – depending on what’s available – plan to stop by the garden between 12-2 pm this Saturday, Sept. 22nd. See details here.

I am out of town (writing), so I will miss this event, but this was my labor of love this past winter/spring/summer, and I can’t wait to get back and experiment with growing a few crops into early winter.

And if you like what you see and hear and taste, you can get on a list for a plot for your family for next year!

Check out Evan Brandt’s blog post today about the most recent sale – at full asking price – for the latest Pottstown home redeveloped by Amanda and Cristian DeSeta of LointerHOME.

Positively!Pottstown blogged about the home at 542 Chestnut Street the day it went on the market – May 25. Eight days later, the DeSetas had it under contract. Bringing the many beautiful homes of Pottstown back to life with new systems and modern kitchens and baths is all it takes. Some may say that’s too much to ask of an investor. But the DeSeta’s formula for success is no secret; you can hear Amanda talk about it here.

There are many reasons why young families, empty-nesters, retirees and young people move to any given community. An up-to-date and varied stock of housing – one that offers choices to these different types of households – is absolutely essential. Kudos to the DeSetas for showing us that it can be done! 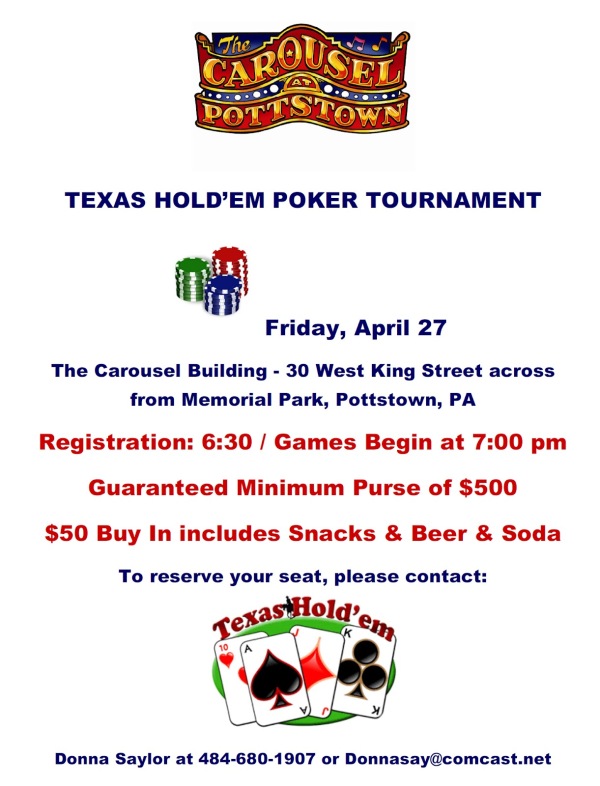 See the details below for a Texas Hold ‘Em tournament that’s taking place TONIGHT at The Carousel at Pottstown. And click here for Evan Brandt’s blog post about it. Oh… and click here if you want to hear Kenny Rogers sing about knowing when to hold ’em and knowing when to fold ’em! 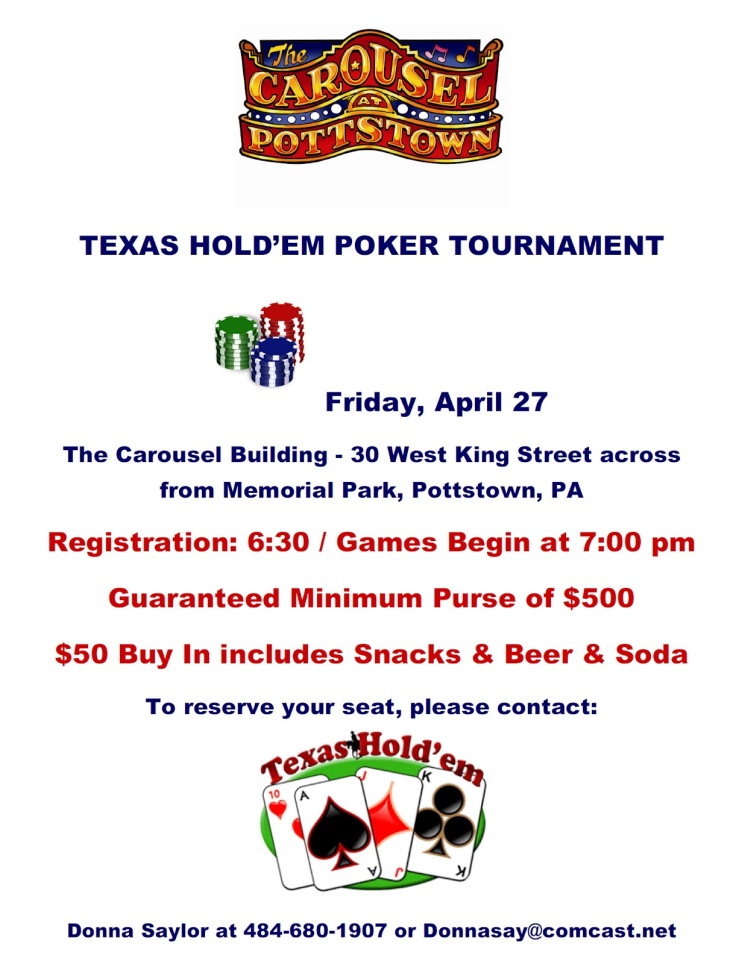 Please check out Evan Brandt’s most excellent article in today’s Mercury on the economic impact analysis that was undertaken by the Pottstown Metropolitan Area Regional Planning Committee over the past year. There will be a meeting tonight at 7 pm in the cafeteria of Pottstown High School to discuss the findings.

The Pottstown Metropolitan Regional Comprehensive Plan is a multi-jurisdictional plan that includes eight municipalities: Douglass Township, Lower Pottsgrove, New Hanover, Upper Pottsgrove, West Pottsgrove and the Borough of Pottstown in Montgomery County; and East Coventry and North Coventry in Chester County. The Montgomery County Planning Commission’s website describes the intent of this plan as an effort “to ensure smarter growth in the region and better management of future development while retaining the unique historical, cultural, and natural amenities of the area.

Two consulting firms were hired to survey residents and business owners in these 8 municipalities and look at shopping habits, economic and demographic data; analyze it; and offer several scenarios to help these towns make informed policy and land use decisions about what kinds of business and residential development to encourage or avoid to improve their fiscal outlook. Come out to the meeting tonight to hear  what the economic future could be for the region and to understand the issues, options, and decisions facing elected officials and policy makers as they try to keep the Pottstown region economically competitive.